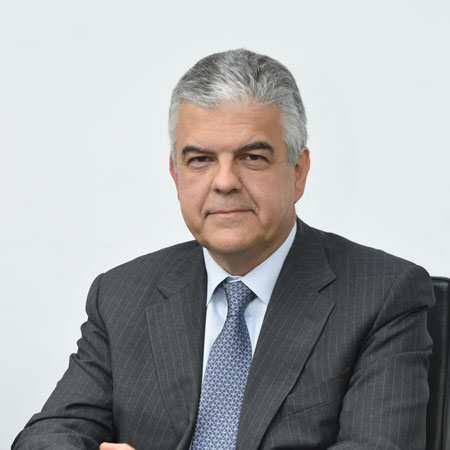 Luigi Ferraris has been Chief Executive Officer and General Manager of Terna since May 2017.
From February 2015 to April 2017, he was Chief Financial Officer of the Poste Italiane Group, which he led through the process of privatisation and stock market listing.
From October 1999 to January 2015, he worked at the Enel Group, holding various top management positions. These included Group Chief Financial Officer from June 2009 to November 2014, Chairman of Enel Green Power in the same period,  where he oversaw the listing process, as well as board member of the Chilean subsidiary Enersis and further on Manager for Latin America and CEO of Enersis to January 2015. He was also a member of the boards of directors of Endesa S.A., a Spanish subsidiary of the Enel Group, and of other major subsidiaries.
From April 2015 to April 2017, he was a board member at ERG SpA, a company listed on the Italian stock exchange, and Gruppo PSC SpA, an Italian leader in infrastructure engineering.
Ferraris began his career as an auditor at PriceWaterhouse and held various managerial positions in leading Italian and multinational industrial companies, starting out with Agusta, Piaggio VE, Sasib Beverage and Elsag Bailey Process Automation, which was at the time part of the Finmeccanica Group and listed on the NYSE. From 1998 to 1999, he was Chief Financial Officer of Elsacom, a company belonging to the Finmeccanica Group operating in the field of satellite telephony.
He has a degree in Business and Economics from the University of Genoa.
He lectures on Corporate Strategy at the LUISS Business School, where he has also led numerous courses as part of the master’s in business administration, such as those on Energy Management and Business Strategy.
He has also lectured on Planning and Control, Management Control Systems, Corporate Finance and Corporate Strategy at the Department of Economics of the “LUISS Guido Carli” University in Rome.
He is married, with two children, and loves mountain hiking, skiing and listening to classical music.