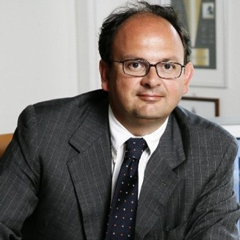 From 2002 to 2014 he held the position of Director of Communications and External Relations of Enel. He was also involved in communications in Telecom Italia, as head of Media relations and in Montedison as Director of External Relations. A career that began as a journalist for the newspaper Il Gazzettino, where he was economic and parliamentary editor from the Rome office. He was also, between 1997 and 1998, spokesperson and head of the press office of the Minister of Public Works Paolo Costa, in the 1st Prodi government. He has been a member of public institutions such as the Communication Committee of the Ministry of Cultural Heritage, the Commission on Advertising and Communication Trends of the Ministry of Economy and Finance and the Information Committee at the Presidency of the Council for the Jubilee. 2000. In 2014 he founded Comin & Partners, a consultancy firm specializing in communication, media relations and public affairs. He teaches Communication Strategies at the Luiss Guido Carli University and is Vice President of Confindustria Venice. He represents the Ministry of Cultural Heritage on the Board of Directors of La Biennale di Venezia.