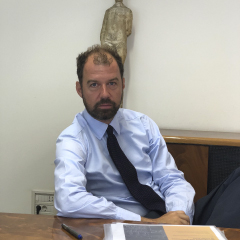 In 1997 he was in charge of International Dossier organization for the Diplomatic Counselor’s Minister Department, Beniamino Andreatta, in the Ministry of Defense and in the Italian Military Centre for Strategic Studies. From 1998 to 2001 he worked for the Olivetti/Mannesmann  – both in Ivrea and Rome offices –  in the Infostrada Company -communication sector and human resources  – and he has been encharded of  management of  Pubblic Affaire. In the same period, he represented the company in Assinform and AIP. In 2001 he moved to the Ministry of Economy and Finances as Chief of the staff of the Minister Giulio Tremonti; he was in the Committee for the introduction of the Euro. In the fall of 2003 he was hired by the Enel as Head of Institutional Affairs and Regulatory and the relations with Confindustria. Since February 2005 he is Director of External Relations, Institutional Affairs and Development of the Caltagirone Group. For the Caltagirone Company, he also  deals with the regulatory part of the company and follow industrial and financial holdings. He is a Board Member of Cementir Holding, Il Gazzettino, Terna and Europe Assistance. Since 2009 he is also Senior Advisor for Credit Suisse AG and Senior Advisor of Tikehau Capital, Paris. He’s member of the International Advisory Board of Afiniti and member of the Advisory Board of Fremantle. He has been Board Member for the CRT Foundation (he was also Chairman of the Investments Committee) and Deputy Chairman for the Sviluppo e Crescita Foundation and Deput Chairman of Equiter (from 2014 to 2018). He was board member of the Board of Directors of Avio (2009-2010); Biverbanca and Consum.it (2008-2012), Alleanza Assicurazioni (2009-2011), Alleanza Toro Assicurazioni (2011-2013), CUEIM CRT (2010-2013); Chairman of Orion Investments from 2010 to 2012; Member of the board of the Teatro Regio in Turin from 2010 to 2013, member of the board of Energia, Perseo, Grandi Stazioni, and he had led with the CEO of FS,  for  Eurostazioni (Pirelli, Benetton, Caltagirone), the process of development and privatization of the Company, member of the Board of NTV Italo from 2016 to 2018. He has been member and founder of Aspen Junior Fellows, of the board for the relations Italia Stati uniti Juniores, member of the Board of Magazines Zero and Formiche. Actually he is member of the Board of Centro Studi Americani, and of Fondazione per L’Arte CRT.