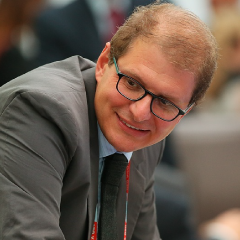 Fabrizio Pagani is since June 2018 Global Head of Economics and Capital Market Strategy at Muzinich&Co.

For the past four years, he was Chief of Staff of the Italian Minister of Economy and Finance, Pier Carlo Padoan. Within the Letta Cabinet, he served as senior counsellor and G20 Sherpa to Italy’s Prime Minister. In these roles he was in charge of policies on budget, banking and capital market reform, privatisation and attraction of foreign investment.

Previously he has been Head of the Sherpa Office of the OECD in Paris and Special Political Counsellor to the OECD Secretary-General. He is currently board member of several companies, including ENI. Fabrizio Pagani studied international relations at the Sant’Anna School in Pisa and completed his Master’s degree in International and European Law at the European University Institute.