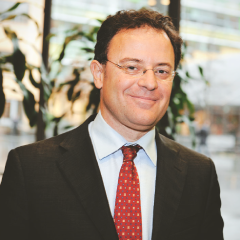 He has nearly 20 years of professional business experience primarily in Investment Banking. First in New York at JPMorgan and subsequently in Milan at Mediobanca. During this timeframe he provided financial advice to several U.S. and international clients regarding mergers, acquisitions and other corporate finance transactions in the U.S., Europe and Asia. He served three mandates on the Global Agenda Council on Banking and Capital Markets. He is a member, as independent, of several Boards of Directors, Advisory Boards and Scientific Committees.

He teaches International Economics and Monetary Policy, Economic Growth & International Affairs at luiss Guido Carli. He is Adjunct Professor at Luiss Business School. He also lectures at Luiss School of Government and at ASP-Alta Scuola Politecnica. He is a fellow at IAI – Istituto Affari Internazionali. Since 2011 Senior Research Fellow at the Harvard Kennedy School of Government. From 2013 to 2015 he was Visiting Fellow at the School of Advanced International Studies (SAIS) of Johns Hopkins University in Washington, DC. He is a member of the Board of Directors of the Center for American Studies and a member of The Economic Club of New York.

He holds a degree in Economics from the University of Rome and an MBA from Columbia University. He is an AFS and a Luciano Jona scholar. He has completed programs in leadership and public policies at the Harvard Kennedy School, at the Jackson Institute for Global Affairs at Yale University and at the Lee Kuan Yew School of Public Policy of Singapore.