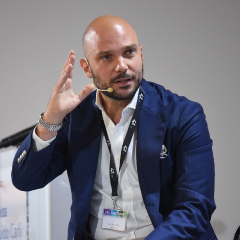 Graduated with honors in Political, Economic and Institutional Communication, he is professional journalist, tv host and columnist for Il Messaggero.

He works as Senior Advisor for corporate and integrated communication projects.

He has collaborated on several television and film projects as well as being an author and collaborator for Mediaset, Rai and Discovery Italia-Real Time.

As Chief Communications Officier of Confagricoltura, his last managerial role, he worked for the communication activities and contents of Expo Milano 2015.

He has been member of the board of directors of Bellas Artes Academy of Lecce.

He has collaborated with Luiss Guido Carli since 2010 and wrote several essays and books.

He is Fellow of The Aspen Institute.