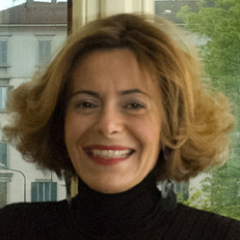 Patrizia Rutigliano, in Snam since December 2009, is Executive Vice President Government Affairs, Corporate Social Responsibility and Communications. A professional journalist, she began her career in television and print media in Italy and abroad. She was Spokesperson for the Municipality of Milan during the privatisation phase of the main municipalised companies, from October 1997 to January 2001.  Subsequently, from January 2001 to March 2004, she was Head of External Relations for Fastweb and of the Press Office for e.Biscom,, taking care of the start-up of the company since its listing. From April 2004 to November 2009 she was Director of Communications at Autogrill, where she followed the process of development and diversification of the group’s business in Italy and abroad. She is a member of the Board of Directors of the French company TIGF Holding and has served on the Boards of Directors of Fiera Milano, where she was also a member of the Control and Risk Committee, of Toscana Energia and of the Il Cittadino di Monza e Brianza publishing company. She is part of the General Council of Assolombarda, where she is coordinator of the Oil & Gas Sector and member of the Energy Group. She was president of FERPI, the Federation of Italian Public Relations, from June 2011 to July 2016. She is part of the scientific committee of RIE (Ricerche Industriali ed Energetiche). She is also a member of the Board of Directors of Valore D. She is an adjunct professor of the Master in Media Relations and Business Communication at the Alta Scuola in Media Comunicazione e Spettacolo of the Catholic University of Milan.