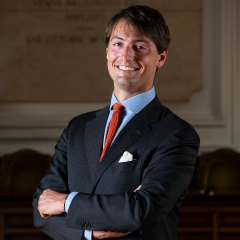 Francesco Galietti is an Italian intellectual entrepreneur who advises, writes and lectures on change at the intersection of business, policy and politics.

Francesco is the co-founder and CEO of Policy Sonar, a Rome-based consultancy specializing in scenarios analysis, non-market risk strategies and political risk management. As the firm’s CEO and most active public voice, he advises corporate executives, investment managers, diplomats, and NGOs.

Since 2012, Francesco has also been a research affiliate with SovereigNET, a centre of the Fletcher School in Boston, US, dedicated to the study of sovereign wealth.

Francesco is currently on the supervisory board of Fondazione CRT, a large banking foundation, and serves as independent and non-executive board member of Banca Sistema, a listed specialty bank. Earlier in his career, he was a senior advisor at the Italian Ministry of Finance and consulted with the task force on sovereign wealth funds at the Ministry of Foreign Affairs and Cassa Depositi SpA.

Francesco earned a Ph.D. in Law and Economics from the Technical University of Darmstadt, Germany. He is an Italian CFA (“Dottore Commercialista” and “revisore legale”) and speaks Italian, German, English and French.

Francesco’s comments are featured across the FT, The Economist, Guardian, Times of London, Telegraph, Asia Times, Reuters, Bloomberg, DPA, Al Jazeera. He also writes a column for the Italian weekly Panorama and authored several books on political permeability. In his essay Sovranità in vendita, he dealt with the thorny issue of Italian party funding and foreign meddling, whereas in Contagio Rosso he discusses China’s clout in the broader Mediterranean. In Q3 2020, Francesco appeared as expert witness on Chinese influence in the public hearings conducted by the Foreign Affairs Committee of Italy’s Camera dei Deputati.