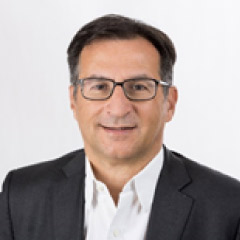 Philippe Tibi has developed his professional career in the technology and capital markets sectors, in Paris and London, including running the equity markets, investment banking and UBS group in France until 2012. From 2007 to 2014, Philippe chaired Amafi, a professional association representing 120 market banks active in the Paris market. Philippe founded Pergamon Campus in 2013. He remains invested in public life and published in September 2016, with Francis Kramarz, Plus de marché pour plus d’Etat! (winner of the Grand Prix Turgot 2017 for best book on financial economics). More recently, he was commissioned by Bruno Le Maire, Minister of Economy and Finance, to propose transformations in the ecosystem of financing for high-tech companies. The report is now public. Its recommendations were announced by President Macron and are being implemented. Philippe teaches Finance and Strategy at Ecole Polytechnique. He is Visiting Professor at UIBE Beijing, Jiaotong ParisTech in Shanghai, AUEB Athens and Luiss Guido Carli in Rome. He has taught for many years at Sciences Po Paris, most recently as Associate Professor in the Department of Economics. A graduate of the Ecole Polytechnique and Telecom ParisTech, he holds an M1 in Business Law from Paris 2 Panthéon-Assas and an M2 in Political Science from Paris 1 Panthéon-Sorbonne.