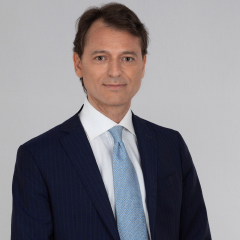 Adalberto Pellegrino has been chief financial officer of Rai Way since September 2014, appointed as part of the IPO process that was successfully concluded in November 2014. Before joining Rai Way he was director of Rai, where he moved in August 2012 to work first as deputy head, and then as chief of staff for the general manager of Rai, supervising cross-functional teams and coordinating the activities of all the departments and the subsidiaries of the Group to ensure delivery of key projects. From September 2009 to July 2012 he was responsible for business development at Wind Telecomunicazioni, with the task of identifying and implementing M&A opportunities and special projects. From September 2007 to August 2009 he worked at Orascom Telecom / Weather Investments in Paris as a corporate finance manager with the responsibility of managing projects related to the financing and M&A activities of the holding and of the group’s subsidiaries.

From 2000 to 2007 he worked in Wind Telecomunicazioni within the Financial Division, where in 2004 he was appointed executive responsible for corporate financial planning. From 1998 to 2000 he worked as a consultant at Unionsim. He was a member of the Board of Directors of Spal TLC, a company operating in the mobile phone and telecommunications distribution market, and a member of the Supervisory Board of Euronews, an information television channel published by the main European broadcasters.